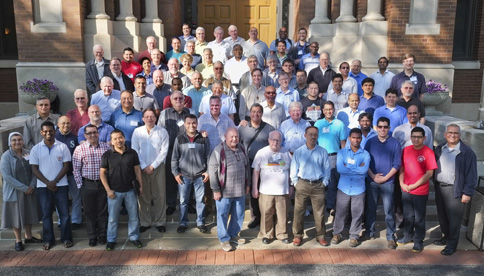 Claretians from the USA and Canada Come Together for 2014 Assembly

During the first week of June 2014, members of the Claretian Missionaries USA Province and the Independent Delegation of Canada gathered for the 2014 USA-Canada Claretian Assembly at the Techny Towers Conference and Retreat Center in Techny, IL.

This annual assembly had special significance because the participants were blessed with the presence of Fr. General Josep M. Abella, cmf, Superior General who—besides spending the week with our members—was present to officially announce the incorporation of the Claretians of Canada to the United States Province, and creating a new USA-Canada Province.

We celebrated the official incorporation on Wednesday, June 4th, with a special Eucharist led by Fr. Abella. During the Mass, Fr. Rosendo Urrabazo, cmf, the Provincial Superior of the newly-incorporated province, and Fr. Carmel Lerma, cmf, from Canada read the official decree issued by Rome announcing the incorporation, both in English and French respectively. Following Mass, the celebration continued with a special dinner, where we were joined by laity from the St. Jude League and Claretian Publications.

During the assembly, we listened to presentations on the various ministries of both countries. These presentations included topics like finance, Claretian Publications in the U.S., and a historical pictorial of the Claretian presence in the U.S., among others. Also, Claretian seminarians currently in formation introduced themselves to the Congregation.

Fr. Abella also addressed the reasoning behind the decision to integrate the U.S. and Canada. He explained a bit of the history behind the revision of our congregational structures around the world and more specifically that of the U.S. and Canada. All our organizational structures are at the service of the mission of the Congregation and have continually been adapted with the changing times.

Later in the week, Fr. Abella also talked about some of the challenges facing the Claretians today. He informed us that we have never been more present among the poor and among non-Christians. He explained: One of the biggest dangers for the Church today is clericalism. We must not forget that the core of who we are is that of missionaries, a way of life where we put all we have at the service of the poor. The next General Chapter will take place in 2015. This will be our 25th and will focus on mission, community, formation, and coordination.

He also asked that we allow ourselves to be challenged by “the Joy of the Gospel” as we are called to be witnesses and messengers to this joy, to talk about community from the point of view of the mission, and to work together in the coordination of the mission of the Congregation. 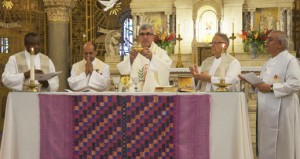